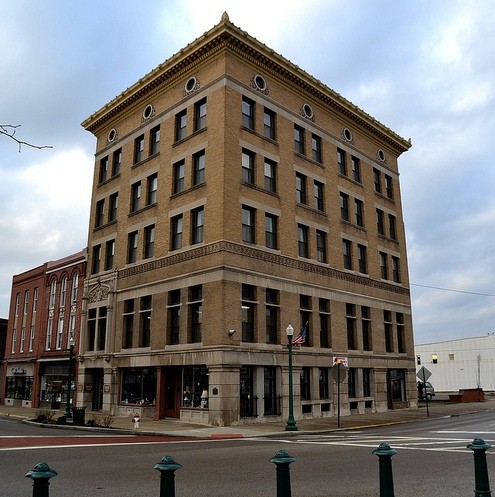 With beautiful views of the Ohio River and across the street from the landmark Lafayette Hotel, The Riverview Building offers modern office facilities with true "Old Marietta" architecture. The Chamber moved to this century-old building in on October 30, 2006, and invite you to drop by and checkout our views or use our conference room space.

For MACC members who need a meeting room, the Riverview Building offers two options:  the library is ideal for interviews or a small group of 4-6. Our Conference Room comfortably seats 12 - 18 people with additional seating around the perimeter of the room.  To reserve either of these rooms please contact the Chamber at info@mariettachamber.com or by calling 740-373-5176.

We do have an LCD projector which is available. Beverages are also always available upon request. We can suggest local caterers if you would like to have a meal or refreshments brought in.

More about The Riverview Building

Construction of the Riverview Building began in 1901 to replace the "Old First National Bank Building" previously on the same site. Shortly after completion, a fire gutted the interior of the building on December 26, 1903. It was rebuilt using fireproof materials and the First National Bank occupied the building. In 1928, it became the home of the Dime Savings Society. In 1972, it was acquired by Harry Robinson and used as an office complex, housing an accounting firm and various other businesses. Today, it is one of Marietta's prime office locations with spectacular views of the Ohio River and downtown Marietta.

Within the chamber offices are three bank vaults. The most ornate features a time lock outer door, a decorative inner ironwork gate and yet a third set of doors that lock with a tumbler system. Manufactured in Ohio, these vaults represent some of the finest work of Diebold Corporation.

For those who love history....Our Former Home: The Bosworth House 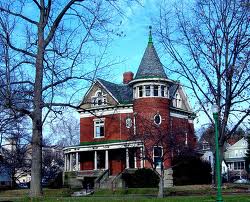 The historic Biszantz-Bosworth House, located at 316 Third Street in Marietta, was acquired after an eight year search for adequate housing for the Marietta Area Chamber of Commerce. The structure, purchased by the Chamber in 1982 from the City of Marietta after being slated for demolition, has been restored. The woodwork, fretwork and ornate plasterwork are still original as is the exterior brick, slate and metal roofing of the house.

Built in 1868, by Martin Pomeroy Wells of the merchant firm of Bosworth and Wells, it was sold two years later to his nephew and business associate, Daniel Perkins Bosworth Jr.  The Bosworths lived in this house for 17 years and raised a family of four children before moving to Boston, Massachusetts.

The oldest son, Hobart VanZandt Bosworth, who became a screen actor and director, received an honorary doctor of humanities degree at the 1939 commencement of Marietta College.

The second son, William Wells Bosworth, after graduation from Marietta Academy in 1889, entered the Massachusetts Institute of Technology and become a noted architect, both in the United States and France, where he helped in the restoration of places and gardens of Versailles and Fontainbleau, as well as the Cathedral of Reims. In addition, he designed gardens and building at Pocantico Hills, residences in New York City, the mausoleum at Sleepy Hollow, and the Egyptian Museum for Cairo for the John D. Rockefeller Sr. family.  After the restoration project at Versailles, Bosworth settled in a town outside Paris and named his home "Villa Marietta" after his hometown in Ohio.

In 1887, Mary Ruth Phillips purchased the house. She sold it ten years later to Frank B. Biszantz, and in 1957, after 60 years in the Biszantz name, the title was transferred to daughter, Catherine B. Robinson, and in 1971 to her widower, Clarence G. Robinson. At Mr. Robinson's death in 1982, the house was inherited by nephew Charles B. Rose, who sold it in the same year to the City of Marietta.

Since the Chamber's purchase in 1983, the house has been restored and decorated to show off its natural historic beauty. The house is a beautiful example of the city's architectural tradition and heritage.